What happens when your Kindle, with the ability to buy stuff from Amazon, is lost or stolen?

Last week, I attended the New Media Expo in New York City. I learned a lot, and had a great time to boot. However, as is so often the case when I travel, I did something stupid. I managed to lose my Kindle by leaving it on the airplane. There are a couple of consequences that come with losing you Kindle like that.

How Did the Kindle Even Get Left on the Plane in the First Place? 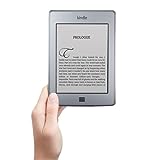 Of course, the first question is this: How did you leave your Kindle on the plane? My son was with me, and I always tell him: “If you aren’t using it, put it in your backpack. Your backpack should always be zipped up.” Wise words that prevent you from misplacing items while you travel.

Too bad I didn’t follow my own advice. I’d probably have been better off to leave the Kindle in my son’s care, since he was great the whole time, carefully stowing his items, and only taking one thing out at a time. I, however, put the Kindle in the seat pocket. We were supposed to stay on the same plane after stopping in Baltimore, so I though nothing of putting the Kindle in the seat pocket. At the last minute, though, they told us all to get off the plane, and that we were bing moved to another plane. I completely forgot about the Kindle in my concern over making sure we were set for the next leg of journey.

I didn’t realize the Kindle was gone until I tried to get it out about half an hour into the flight from Baltimore to Salt Lake City. I can’t seem to get away from bad decisions when I travel, no matter how hard I try.

When I landed, and told my husband, he tried to soothe me: “It’s just a hundred dollars. We can save up for a new one.” While losing a Kindle — with some of my favorite books on it — stung, my real concern was with what happens when someone else has the Kindle. After all, the Kindle is set up so that it’s easy to quickly make purchases. I was picturing someone ordering a crap-ton of stuff while I sat helplessly in the air.

As soon as we landed, I took the following steps:

Other steps that you can take include filing a police report (especially if your Kindle was stolen), and double checking your credit card account linked to your Amazon account, just to make sure that no one has made purchases in the time it takes to de-register and blacklist your Kindle. I like having a credit card attached to the account because you can challenge fraudulent charges, and you aren’t liable for them. I’ll keep an eye on my credit card, just to make sure that all is well.

Also, your Kindle purchases are saved, so you can read them later, or add them to a new device when you purchase it.

Be careful with your possessions. Replacing them can be costly. My son knows that when he isn’t careful with his possessions he has to replace them with his own money. And, of course, I will have to replace the Kindle using my own money. I will have to use money I had hoped to use for something else to buy a new Kindle. I will probably wait a few days to see if there is word on my device, but I doubt it. And, if the Kindle does show up after I buy a new one, my husband thinks he’ll be able to make good use of it.

Have you ever lost an electronic device? What did you do?

2 thoughts on “Adventures in Stupidity: Will I Get My Kindle Back?”