There’s a reason my finances are largely automated. But sometimes it leads to some serious financial #FAIL. Don’t be “too busy” to pay attention to your finances.

I’ve experienced a busy couple of months. It’s a busy time of the year for the PTA board at my school, and my son and I went on spring break not too long ago. I’ve also had some personal things to deal with and a few other issues. The result is that I’ve fallen behind a bit on taking care of my finances.

Do You Have to Pay Attention to Your Finances When They’re Automated?

My finances are largely automated. Bills are paid, money is transferred between accounts, and a number of other items are taken care of without a lot of effort and active intervention on my part. However, there are a few bills that can’t be managed automatically. I still don’t have my utility providers on any sort of automatic bill pay, and occasionally I have a one-time expenditure that requires me to pull out the (little-used) check book.

Plus, I try to balance all of my statements every month so that I can verify my transactions and see where I stand. It’s a good way to keep tabs on the situation and catch identity theft, as well as make sure that I don’t run into problems like double-billing.

Unfortunately, when I get busy, I let the fact that my finances are mostly automated get in my way. That’s been the case for the last three months. The major things are all taken care of, so I’ve been a bit lazy about my finances, pushing them off in favor of the other activities and issues claiming my attention. I don’t have a lot of breathing room yet, but things are starting to look a little serious, since I’ve had a series of financial #FAIL situations.

You have to pay attention to your finances, even when they’re automated, or you end up running into problems.

For the most part, my financial #FAIL hasn’t been?awful. But it’s been silly enough that I’m a bit embarrassed. I’m a?financial writer for heaven’s sake. Some of my bios even claim that I’m a financial?expert (although I don’t always feel I “deserve” that title). But it turns that financial “experts” are humans, too, and we all have our financial #FAIL moments. 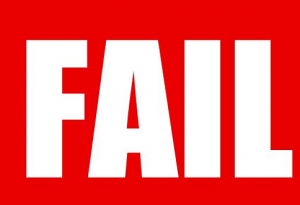 My biggest issue has been paying late for?everything recently. I had planned to mail the bills before leaving for a week to enjoy Arizona and San Diego, but I didn’t. I didn’t even think about it. When I got back, those bills were already late. I dropped them in the mail ASAP, but that didn’t stop one of the utilities from already closing the statement and carrying over the balance. At least I wasn’t charged a late fee.

I also completely spaced sending in a payment to someone else, and what should have been sent off within a week of signing a contract was sent almost three weeks later. I felt especially bad about that because I’m a freelance professional, and, as such, I know there’s nothing worse than knowing that the money *should* be there, but it isn’t yet.

Pretty much, if I owed you money in the last three months, whether you’re a utility, the government, or my babysitter (yes, the?babysitter), I’ve paid late.

And I still have three months’ worth of bank statements to reconcile (facepalm).

While this isn’t the end of the world, I will likely be charged fees and penalties for some of these lapses. My finances aren’t tanked or anything, but it’s these little things that can add up. If you don’t pay attention to your finances, the little things can start to add up to big things. Whether it’s paying more than you should for investment fees, or whether it’s not realizing when an expected direct deposit didn’t come through, or whether it’s not reading correspondence from your bank, the financial #FAIL in your life can start to become a problem.

I’m almost to the point where I need to take advice from my buddy Pete and take a personal day to get things back on track. It might not be?that bad yet, but I can’t keep going on like this.