This is an article summary from those involved with research about money decision-making and evolution — and how baboons can teach us how to avoid being fooled by our own brains.

Do we have to be taught how to count, or is it something we already know? Scientific studies have shown that the answer may be more complex than we think ? and that humans aren't the only ones with an eye for numbers.

Decades of evidence have shown that counting, surprisingly, isn't a single skill. Instead, there are two different ways that we count. When subitizing ? named after the Latin word for ?sudden? – we can instinctively recognize quantities in merely a fraction of a second. The catch is that this only works for numbers under 4. 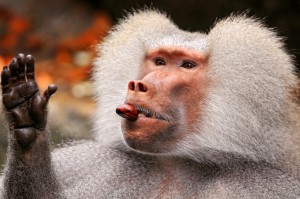 How do we know this is instinctive? In the 1990s, cognitive scientist Karen Wynn showed that infants will pay attention for longer when a number of objects appear to add up to an impossible sum, such as ?1 + 1 = 3?. Even at this age, they can tell the difference between an expected and correct answer, and one that's wrong.

For larger numbers, we use an approximate number system, which works by comparing two quantities to see which is larger ? and the more different the numbers are, the easier it is to tell them apart. This ability is instinctive too, and it develops as we grow up. At six months, babies can only distinguish between quantities with a very high ratio of difference, such as 8 and 16. Yet by adulthood, we can recognize that 100 and 115, a much finer ratio, are different quantities.

Most remarkably, these same counting processes are now known to take place in our close evolutionary relatives. In a recent experiment, olive baboons, an Old World monkey sharing 92% of its DNA with us, were allowed to choose between two cups containing a number of peanuts ranging from 1 to 8.

Could they tell the difference? Yes ? but not with perfect accuracy. Instead, they were more proficient at picking the higher of two very different numbers, and less accurate when the numbers were closer together, reflecting our own counting abilities.

These are skills we use every day ? so what does this mean for our behavior? Startlingly, these counting abilities may be implicated in our financial decisions. By the 18th century, Daniel Bernoulli had shown the difference between $100 and $200 is seen as greater than that between $1,100 and $1,200, even though the difference is equal. Likewise, a 1984 study confirmed that people think a $5 discount off a $15 item is better than the same discount on a $125 item ? just as predicted by the approximate number system.

What can we do about this? Beating this evolutionary money decision-making pull may require looking at the bottom line ? not the savings. After all, it all comes down to what you're spending. Discounts are meant to offer a ?thrill? of feeling like you got a deal, but the only good bargain is one where you actually spend less money for the same value. And watch the numbers: 33% off isn't the same as getting 33% more of a product ? you'd need 50% more for it to be worth it. By remaining aware of what we're actually getting for our money, we can avoid being fooled by our own brains.