So far, my recent car accident hasn’t cost me anything (other than my valuable time), but I’m sure that will change, because insurance companies.

While I was in the middle of dealing with keeping my universal life insurance policy in force, a college student (a lovely person, I’m sure) making a left-hand turn hit my car. I tried to avoid the car accident by moving out of the way, but, alas, my effort wasn’t enough. And boom.

The damage wasn’t as bad as it could have been, and the cop who saw it from down the road commended me on my actions. But it didn’t make me feel much better, since it was just before FinCon, and I was already dealing with different insurance issues.

No matter. I had to deal with it, and deal with it I did. Actually, I’m still dealing with it. 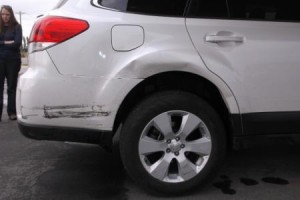 The Biggest Car Accident Cost So Far: My Time

Since the car accident was the other driver’s fault, I haven’t been out of pocket. I could have been, if I wanted to file a claim with my insurer, and pay the deductible to get things moving. But, instead, I let the car sit uselessly while the other driver’s insurance company tried to get a hold of her for a statement.

The biggest cost of this accident has been my time. I think my time is valuable. And I have spent hours dealing with this. When I got home that very evening, even though it was Friday (October 11, 2013) night, I called my insurer’s accident report line and gave all the information I had. Then, on Monday morning, my insurer called me, and I went through it all over again.

I had motivation to get things moving as quickly as possible, because I was leaving for St. Louis. I figured that if we could get things squared away, one week of the estimated?two-week repair job (I’ve seen pictures and the repair isn’t on track to be done within that time period, as far as I can tell) could be completed while I was out of town. I was surprised at the estimate, since the damage didn’t seem so bad. But, apparently special parts were needed, and a panel needs to be replaced, and that isn’t easy or cheap. No need for a rental car, since I’d be out of town.

The other driver’s insurance gets a little savings, too!?Everyone wins!

So I was a little disgruntled when the other driver’s insurer wasn’t as quick as I would have liked. In fact, it wasn’t until the Wednesday after the Friday accident that I was contacted. Of course, I was in an airplane when the other insurer called, so the first thing I discovered upon landing in St. Louis was a voicemail (well, two: the rental car company had called as well). Instead of finding my friends upon arriving, I returned the phone call. I was sent to voicemail, so I left a message and proceeded to wait for a return phone call. (This, incidentally, is when I decided to put the Kindle version of my book on Amazon

. It was a whim, and probably stupid, but I didn’t have a whole lot else to do.) 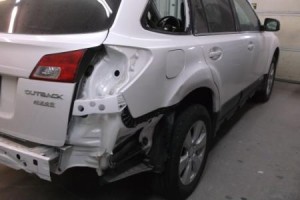 After a couple of hours, I decided he wasn’t calling back on Wednesday, so I went to find my friends. I called him twice on Thursday morning, leaving messages. He finally called me back Thursday (the 17) afternoon. While I was in the middle of a conversation circle that included some Very Cool People. I stepped away to give my statement yet again. At this time, the insurer asked if I had been contacted by Hertz about a rental car. I HAD been contacted, as it turned out, and I told Hertz that I didn’t need a car at that time, since I was out of town. The representative told me that I could go in on Monday the 21 and get a rental car. So I did.

With the conversations, and the taking the car in, and waiting around, and everything else, I’ve spent hours on this. That amount of time amounts to a pretty decent chunk of change when I convert my writing to hourly pricing. And here’s the thing: I had been back from FinCon for days before the other insurer called to let me know that he had?finally?talked to the other driver. My car sat in the repair shop for two weeks before repairs even started. And I’m still driving a rental car that I’m not very fond of because it’s so different from?my car.

To add insult to injury, it was only?after I had the rental car for a little more than a week, and after repairs had?finally been authorized (even though the other insurer announced that it would cover costs, it still took a few days for them to get an adjuster to the body shop) that I received paperwork indicating that my rental would be authorized for two weeks. Bear in mind that I had already been verbally instructed to go in and get a rental car following my return from St. Louis. I did my best to save them money, but I already sense that I’ll be fighting with Farmers to cover at least one week’s worth of rental car.

So, while I’d like to think that it’s probably not the insurer’s fault, and I don’t know what’s going on in the life of the other driver that’s do damn important that she can’t give a statement, it’s still been frustrating. It doesn’t help that I’m already annoyed at the extra paperwork I’m doing with the life insurance. And it’s been costing me my time. I haven’t been able to get as much work done, and as I try to catch up, it cuts into the time I’m able to spend with my son. And I’ve had to put off working on some non-work projects in the community that I enjoy. All of that annoys me because I can’t spend my time how I want.

I can’t imagine how annoyed I’d be if I had to pay for this on top of everything else. If that ends up happening, I may have to take this to 11.

1 thought on “Car Insurance is Fun: Dealing with the Aftermath of My Car Accident”