Looking for deals without the need to sign up for daily deal emails? Groupon Coupons might be your ticket.

Later this year, I'll be attending a wedding. I won't be directly in the wedding party, but I'll be tangentially related to the wedding party, and I'm supposed to wear a nice dress in a specific color. When I found out that Nordstrom is one of the stores featured?on the relatively new Groupon Coupons site, I decided to head over and see what was available.

Prom dresses happen to be available, and since those dresses can do double-duty for any number of swanky events, I began looking for a low-cost gown. I ended up finding something that would work for $179. Similar gowns at other stores, according to a search I ran, cost more than $200, so I was reasonably pleased with the results. 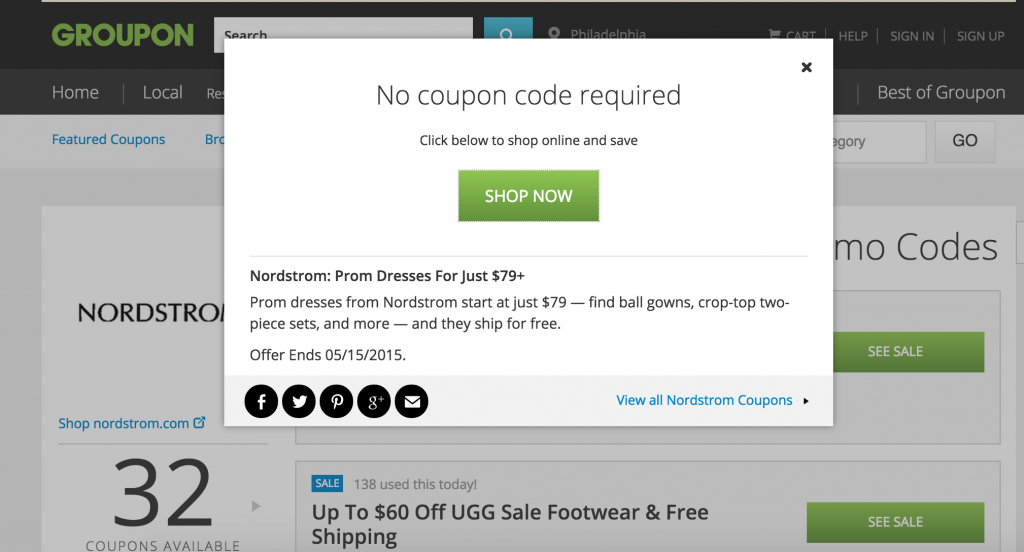 When many of us think of Groupon, we think of daily deal sites. Groupon was one of the first daily deal sites, and is still considered one of the most (if not?the?most) well-known of these sites. Daily deal sites offer chances to make purchases for low, low prices — as long as you are willing meet the terms and conditions of the deal.

Daily deal sites aren't really my thing (well, coupons aren't either), but I've had good luck with them when looking for experiences and travel deals. Now, Groupon is offering deals that go beyond the daily deals in your inbox. You can get access to discounts and deals on other purchases through well-known retailers like Sears and Home Depot, in addition to stores like Nordstrom. A visit to the Groupon Coupons site offers instant access to savings all over the Internet — including on sites like Hotwire and Amazon. There are more than 55,000 coupons available from more than 8,000 retailers, and Groupon is always adding new stores and partners.

If you want to just go to the deals, rather than take whatever is sent to your inbox, this is one resource you might be able to use. The discounts aren't always as deep as what you might get from one of the “regular” deals delivered to your inbox, but you have much wider variety. And, like signing up for the daily deals, Groupon Coupons is free. It can make sense to take a trip to Groupon Coupons before you go

It can make sense to take a trip to Groupon Coupons before you go shopping, whether you are shopping online, or whether you want to snag a coupon before you head to a brick and mortar location.

I don't believe that pinching every penny is the key to wealth. However, in the last couple of years I have been seeing the value in taking simple actions that can save you a little extra money. While I doubt that I'll spend a ton of time on Groupon Coupons, I do think that it's worth it to head over and see what types of discounts and deals are available when you have a specific purpose in mind. You might be surprised at the money you can save.

What do you think of coupon and daily deal sites? Have you tried Groupon Coupons?

6 thoughts on “Could Groupon Coupons Help You Save More Money?”