We talk a lot about what’s “smart” for people to spend money on. We also tend to believe that you only deserve nice things after you’ve “earned” them. So, what’s that threshold? What’s the magical level at which someone deserves nice things?

A few weeks ago, when I showed up for my volunteer shift at the Community Food Basket (donate, the need is real), there were flowers from a local store. Rather than throwing them out, someone with decision-making authority decided to send them along to be given out with the food. 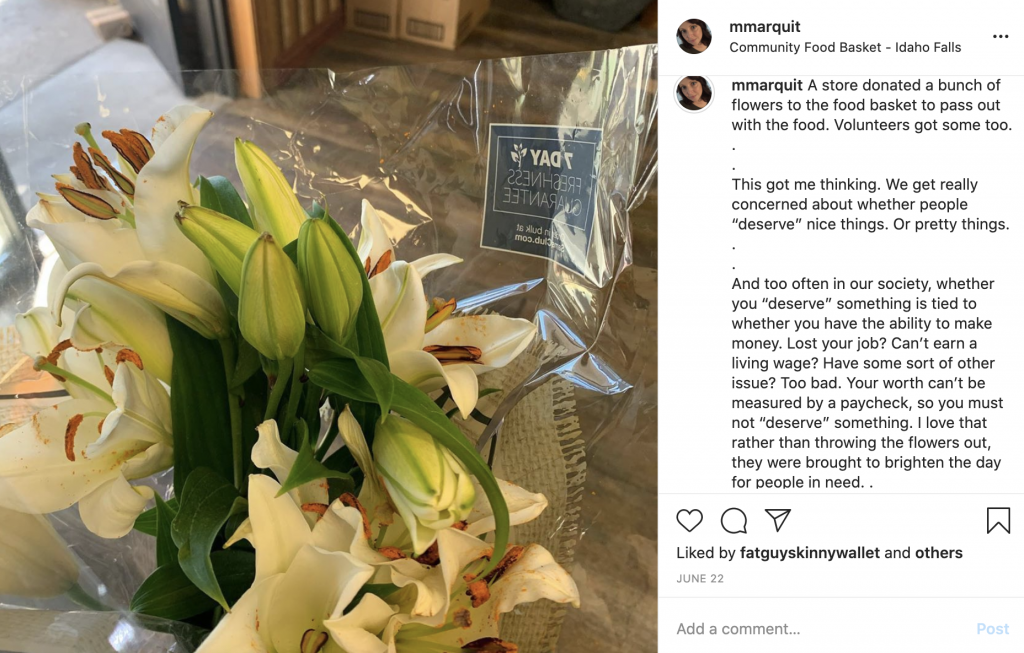 Since that day, this post has been kicking around in my head. We place a lot of emphasis on who deserves what, and what kinds of purchases are acceptable. And, for some reason, the stakes get higher the less money you have.

For those without means, whether you deserve something becomes even more of an issue. Dinner at a fast-casual restaurant becomes positively criminal if you “should” have used that $40 for paying down debt or if you didn’t pick up an extra shift at work this week.

So, at what point do you deserve nice things? And why do we place so much emphasis on net worth or hourly wage when deciding who deserves what?

How Does One Earn Nice Things?

Some of the people I mentioned the flower situation to were fairly upset about it. Even a few people volunteering at the Food Basket were miffed about the situation. The flowers were headed to the dumpster behind the store anyway, so why does it matter if people in need ended up getting something nice to brighten their day?

Well, our national psyche is built around the value of work. If you’re out of a job — no matter why you’re out of a job — you’re not working. Therefore, if you’re not working, you’re not “earning” your keep. And you don’t deserve nice things. It doesn’t matter if the nice thing is as simple as a bouquet of flowers. There are people who are upset if something beyond the most basic of foods is given out at the Food Basket.

If you’re not doing some sort of a job, you shouldn’t have anything “extra.” Whether that’s flowers, ice cream, or basic human respect.

It goes beyond a job to “enough money”

That’s not where it stops, though. Even people who work hard at jobs that don’t pay them enough to live on don’t deserve nice things in our society.

We just sort of figure that you should be scraping by, barely surviving, and having something nice doesn’t figure into the picture unless you’re doing something “smart” and you have “enough money.”

I mean, the person working 50 hours a week at two jobs, earning $9 an hour, doesn’t deserve to buy a $5 treat because all of that $450 they “earned” should be going to something else. Paying down the credit card they had to use to on car repairs last year (so they could drive to their two jobs) maybe. That is if they aren’t already behind on the rent that takes up a large percentage of their income. Maybe that’s where the money should be going. But they don’t deserve ice cream, FFS.

We look down on people all the time for their “poor” choices. That only stops when they make “enough” money. Whatever we believe that amount represents.

Therefore, if you lack financial success, you must not be working hard enough. Or smart enough. That’s a relatively new development. The idea that you don’t have to work hard. Just work smart and you can also be financially successful.

In a society that believes that a lack of morality should be punished in some way, that translates to “you don’t deserve nice things” if you don’t make enough money to “prove” that you’re hard-working and/or smart.

If you’re barely making enough to survive, it’s considered a personal failing. It doesn’t matter if you live in a place where low-wage jobs continue to be the norm. 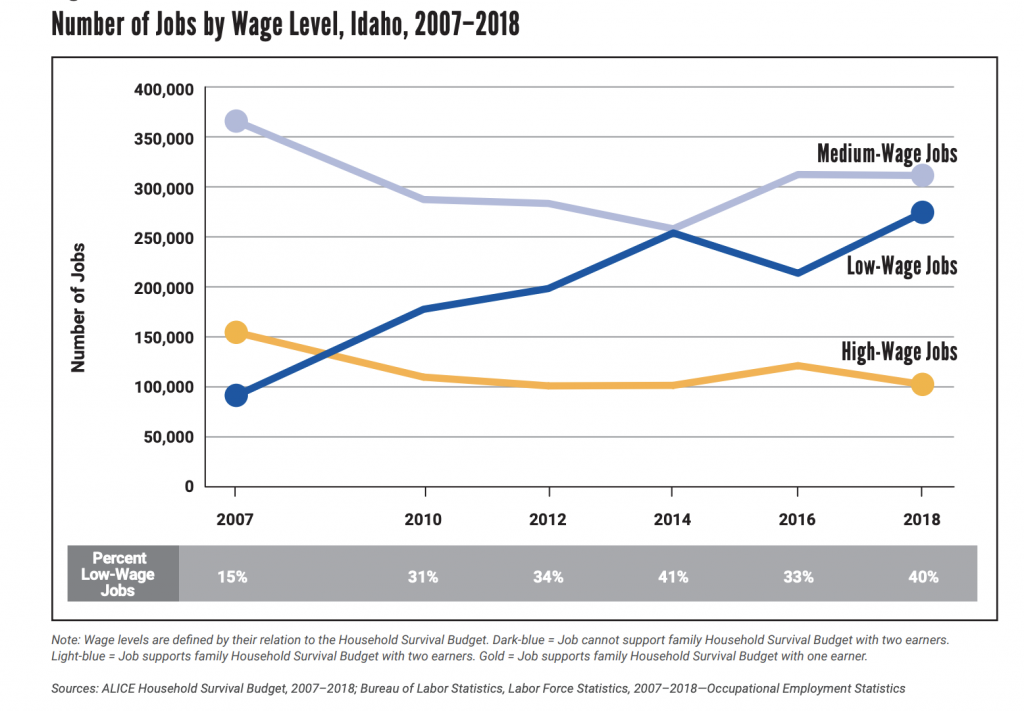 It doesn’t matter if housing and food costs suck up most of your budget, leaving very little. We still consider it a matter of morality if you don’t make enough to truly afford nice things. And if you’re morally suspect, why should you be “rewarded” with a bouquet of flowers at the Community Food Basket?

Productivity is up, but you wouldn’t know it by the wages people are paid. That doesn’t matter, though. Say what you want about net worth not equaling your personal worth. Our society still largely equates adequate means with morality. And that means if you’re scraping by, living in the margins, there must be something wrong with you. There must be some moral failing keeping you down.

Humans Exist for More Than Just Working to Survive

We often try to determine what makes humans, well, human. Is it our opposable thumbs and ability to make and use tools? What about our creativity and ability to create and appreciate art? How about the fact that we’re capable of contemplating our own mortality?

Whatever it is that we think makes us human, I’m pretty sure that the purpose of life goes beyond working really, really hard just to survive. There’s something to be said for being able to buy some nice steaks and grill them up for your friends some Saturday afternoon. But you can’t do that if you had to pick up an extra shift because you’re trying to pay for your kid’s STEM camp in the hopes that maybe that will help them get just enough of a boost that it helps them break the cycle.

Because your kid doesn’t deserve that “extra” education if you don’t have enough money to make it happen. And you don’t deserve those steaks anyway. Don’t you still have a car repair on your credit card?

Personally, I think the ability to find meaning in life beyond mere survival is part of what makes us human. There’s a lot that makes us human, but our ability to connect with others, appreciate beauty, and look for purpose are part of the equation.

Unfortunately, we put all sorts of qualifiers around that. You can only pursue beauty after you’ve checked certain boxes. It’s only ok to “seek a better life” if you’ve done it a certain way. Self-improvement is only acceptable if you can afford it.

We have a whole list of “sins” you can commit that invalidate your attempts to improve your life. However, one thing is certain. We say hard work is the most important thing to us, but it isn’t. As a society, we’ve decided money is actually the measuring stick. And we’ve created a false equivalency by saying that hard work results in adequate means. The numbers show, clearly, that hard work doesn’t always result in being able to meet basic necessities.

But we’ll still judge you for not working hard if you live in poverty. And we’ll insist that you don’t deserve to stop working until you make “enough” money.

We ALL Deserve Nice Things in Our Lives

Right now, I’m finishing up my last course for my MBA. In reading about pricing, my textbook made an interesting observation. It pointed out that people who lived below the poverty line were more likely than those in the middle class to buy name brand items.

At first glance, it’s easy to judge. WTF? How stupid! But the textbook pointed out something very real about this phenomenon. To someone with small means, just a taste of “luxury” can add something to a person’s experience. Most people living below the poverty line can’t afford the everyday pleasures many of us take for granted. If you can save up enough, probably over the course of several months, to buy those sneakers, and they help you feel like you can occasionally have something “nice,” well, who am I to judge harshly?

It doesn’t, really. All we see is that the mere presence of money means that someone considered rich “deserves” nice things, while someone who doesn’t have as much money should be “spending wisely.”

Hard work has nothing to do with it, really, but we perform the mental gymnastics necessary to keep convincing ourselves that it’s the hard work that makes people deserving — all while punishing hard workers for their lack of money.

And, of course, if you’re not pulling down a paycheck, you’re really undeserving. It doesn’t matter if you’re working hard at healing from an injury, working hard at being a caregiver, or working hard at finding a new job. Because the reality is that, in our society, it’s the money that actually matters, not the work. It’s why traditional “women’s work” in the home isn’t treated as valuable — it doesn’t come with monetary compensation.

But, you know what? I think we all deserve nice things sometimes. We all deserve to have a treat sometime, even if some guru says you can’t afford it. And there’s nothing wrong with getting flowers with your food assistance.

7 thoughts on “Tell Me — What’s the Hourly Wage at Which Someone Deserves Nice Things?”