One of the things that really irked me about the first presidential debate held between President Obama and Governor Romney (other than Obama doing little to call out Romney on his prevarications) was the focus on the economy.

It bothers me because I really don't think it matters who the President is, in terms of the economy. Mainly because a number of Obama's ideas to kickstart the economy were never implemented, or extremely watered down, because it's not the president that makes the laws that make these things happen.

Congress is in charge of making those laws. So a president can make economic policy suggestions, but the truth is that Congress has more of an influence over what happens to our economy. 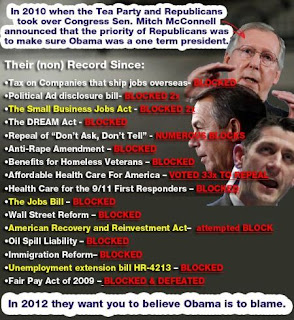 Actually, a lot of the policies that a presidential candidate campaigns on require Congress to carry out, whether they relate to the economy or not. This is a large reason why the left really hasn't been getting what it wants in the last four years — especially since Republicans took back the House.

There's a reason Progressives have been disappointed, and that reason is that there hasn't been much progress made at all. From so-called “Obamacare” to bullying over the debt ceiling, to other compromises offered to Republicans (and often rejected), it's fairly clear that what the president intended when he took office, and what can actually be accomplished in Washington, D.C. are two very different things.

And there are few areas of policy where that is as true as with the economy. It really doesn't matter a whole lot whether Obama or Romney wins in terms of what will happen with the economy. There are the Fed's monetary policy decisions to deal with, and whoever wins will have to get his ideas through Congress. And that's likely to be quite difficult — especially if the status quo is maintained.