I know several people who believe that the ruling handed down on the health care reform bill passed in 2010 is the end to freedom as we know it.

Honestly, though, there isn't a lot to be worried about. The first thing you have to realize about so-called “Obamacare” is that it isn't government-controlled health care. Don't worry; the government isn't going to run your health care. 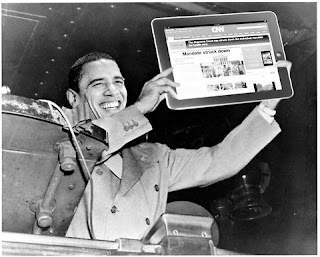 You don't have to worry about the government telling you where to go, or denying you coverage. No, that power still rests firmly with the insurance companies. Corporate America is still responsible for rationing your health care, telling you which doctors to see, denying your coverage, and jacking up your premiums. (Don't kid yourself. Health care reform or no, the cost of health care will always go up. Premiums were rising at a rapid rate for years before health care reform, and costs will continue to rise even after. It's the way a for-profit health care system like ours works.)

Really, a public option would be nice. But we're not going to get it. For some reason, in our society, we seem to think that restrictions on our options by corporations are just fine. Laudable, even. However, once someone tries to give us additional options, like a health insurance plan that we can choose as an alternative to the lack of choices in the current system, we freak out — because the government would be offering the insurance and requiring a sliding scale (based on need) premium. But I digress.

The point is that the new health care reform law doesn't really change the system in a very meaningful way. Some positive changes include no more denial for pre-existing conditions, and things like state insurance exchanges which could give self-employed people like me opportunity to find better deals, as well as a few other small improvements. However, it's not quite the sweeping overturn of freedom and order that many seem to think it is.

For most of us with health insurance already, it's really not going to change things. For those without health insurance, there is a requirement to purchase it; those with lower incomes will receive help. (If you are interested in learning what it means for you, the Washington post has a nifty tool. Hat tip: My buddy Steve at My Wife Quit Her Job.)

In fact, the idea of an individual mandate isn't all that new. A mandate on certain employers to purchase insurance for certain workers was passed in the very first Congress. Which, of course, included founding fathers. The first individual mandate for health care was passed 1798, and other individual mandates on other items have been passed. Honestly, requirements for the purchase of health care are as old as our nation and have even been considered by various leaders since — including Republicans.

Bottom Line: Health care “reform” doesn't really change the system. Your health care remains safely in the hands of the virtuous corporations, and the totally incompetent and morally void government won't be interfering much with your actual coverage.

And you can take comfort in the fact that even the founding fathers passed laws requiring health care coverage.

1 thought on “Don’t Worry: The SCOTUS Ruling on Health Care Won’t Be the End of Freedom as We Know It”