Do you eat chocolate at least once a week? If so, you might be more financially successful than someone who doesn't.

Earlier this week, I received a press release related to the release of Ghirardelli‘s new chocolate line. Normally, such releases go right into the trash folder. But this one came with a financial twist (which is why I'm sure it was sent to my inbox). An online survey conducted by Harris Interactive looked at the way Americans are ready to upgrade their lifestyles — and it also looked at the connection between chocolate and financial success. 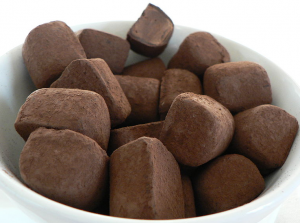 I love chocolate. I'm especially fond of dark chocolate. And, according to this poll, my love of chocolate might also be related to my financial success. Here are some of the results:

Alright. Looking at these numbers, it's pretty obvious that eating chocolate isn't going to lead to financial success. Indeed, there really isn't a huge gap between the surveyed groups. And, because the survey was pretty much voluntary and online, you really can't attach any scientific or statistical significance to the study at all. But it's a pretty fun look at the relationship between chocolate and finances anyway.

I'm inclined to think that, really, the difference is that someone who makes a little more money can probably afford to eat more chocolate — and eat better chocolate — than someone who is unemployed.

I suggest, if you want to upgrade your lifestyle, you consider where you are spending your money, and think of a few things that you can do to ensure that, in 2012, your spending matches financial and personal priorities. Take a look at what you have been spending your money on. Are you spending money on things that aren't important to you? You'll feel as though your lifestyle is improving if you cut spending on the stuff you don't care about and instead focus on spending money on things you actually enjoy.

I don't care much about stuff. So, why would I spend money on more knick-knacks? I wouldn't. I'd rather go out to eat. I'd feel like my lifestyle had been upgraded if I could go out to lunch an extra time each month; purchasing a new vase for display in my home would just feel like a waste.

Upgrading your lifestyle doesn't have to be about spending a lot of money or earning more. Simple, inexpensive pleasures that you truly enjoy can go a long toward helping you feel as though you are upgrading your lifestyle. And that can include…chocolate. Here is one more “finding” from the survey that I can get behind:

3 thoughts on “Eating Chocolate: The Key to Financial Success?”