You never can be too careful when buying things online, especially when people are going around stealing packages off doorsteps.

Read about how we got our money back.

Update #2: The post office guys are supposedly trying to locate the package, looking for it along its route. No one has brought the package back to the post office, though, and it hasn't turned up as returned. We've let the seller know that we still don't have the package, contacting him through eBay. However, he has yet to respond. We are going to give it a couple more days and then try to decide what to do. If the package isn't returned by whoever it was mis-delivered to, we will likely file a police report, and do what is required to go through eBay channels to try and get our money back.

Update #1: It appears that some of my faith in small town America might be restored — although any sort of faith in the USPS is slipping away. After being told it was probably stolen, but they'd check into it, the post office guys discovered that the package was probably mis-delivered. Apparently their scanners for delivery confirmation provide insight into which route it was on. The package was not scanned to our route; it was scanned to the wrong route. Unfortunately, the carrier does not remember delivering the package (they're assuming, though, that he scanned it as “delivered” en masse with a bunch of other packages at the beginning of his route, rather than scanning when the package was actually delivered). So, now we have to hope that whoever did receive the package will return it. But, if the recipients tore open the package without paying attention, I doubt they're going to quibble with now owning a sweet toy.

Normally, when we buy things online, through Amazon or eBay, they are relatively inexpensive. A box of pasta. Lord of the Rings action figures. We did spend $100 on my son's Lego Hogwarts castle. And, of course, my Kindle came through the mail. However, in the instance of these higher-priced items, signature confirmation of delivery was required. So, while we were a little nervous about spending $307 on a Lego Death Star we expect to give our son for Christmas (we do the holiday spending throughout the year to spread it out), the deal was great, and we've had such good experiences that we went for it.

Unfortunately, it appears our package was stolen right off our doorstep. 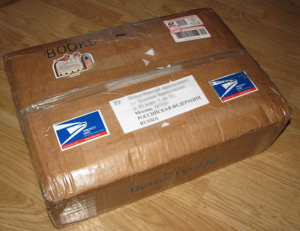 The Grisly Details of Our (Presumably) Stolen Package

To be honest, I didn't really think that it could happen to us. We live in a quiet subdivision in what is considered one of the safest metro areas in the country. However, we weren't home on the day the package was delivered. The eBay seller that sent the package didn't tell us when he was sending the package (often, sellers let you know when they send the package), nor did he provide a tracking number until after?the package was marked as delivered by the post office. If we had know the package had been sent and was due to be delivered on Saturday, we would have made arrangements to be home.

Unfortunately, we had no idea. The seller didn't even give us the tracking number until my husband sent a message asking whether or not the package had been sent — because we hadn't seen it. The next step was to call the post office. “It looks like it was delivered,” was the response. “We didn't get it. Could you talk to the carrier?” Technically, I guess we don't know?that the package was stolen. The Saturday carrier (who is different from our regular carrier every other day of the week and happened to be different in this case) has not responded to the message the guy at the post office said he left. So we're basically helplessly twiddling our thumbs until the post office can contact the carrier and confirm that she really did leave the package on our doorstep, rather than just scanning all the packages in the truck on Saturday as “delivered” to save time (something I'm told happens by a former post office employee).

The real question, though, is this: Can we get our money back? Or at least some of it back? We're looking into our options, just in case the package can't be located. The post office employee said that once we receive confirmation that the carrier did, in fact, drop off the package, we can file a claim. We can contact the police, and then file paperwork with the USPS.

Another possible avenue is to go through eBay. I hate to go this route, since I feel bad about the seller losing out. However, the seller didn't buy insurance on this item, and didn't request signature confirmation. According to eBay's Buyer Protection, it looks like we have a case since the seller didn't request signature confirmation, as required on items valued at more than $250. (This one more reason that you really should read all of the terms and conditions and fine print before you sign up to buy and/or sell anything online.) We'd really like to resolve this with the post office, though, and not get into with the seller.

What do you think?

42 thoughts on “Goodbye, $307: Package Stolen Right Off My Doorstep”