Looking for financial pain? Sell your home (for less than you paid) and go through the real estate closing process.

When we bought our home, the real estate closing process wasn’t that bad. It sucked, since there was a lot of papers to sign, and we had to do it at almost 7 pm. But, other than our meager down payment, we didn’t have to come up with any cash.

Contrast that with being on the selling end of the equation. As a seller, you are expected to come up with the closing costs for the buyer, as well as whatever costs come with selling your home.

But even if you are prepared ahead of time, the real estate closing is a harrowing process — especially if you are located across the country. There has got to be a better way to manage this process. 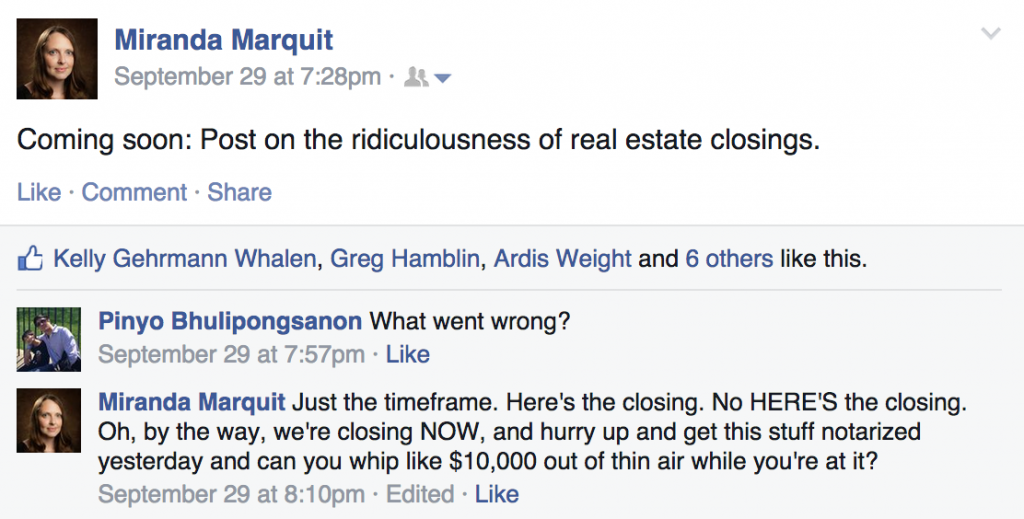 How My Real Estate Closing Went Down

First of all, I’m grateful for the way our particular closing went. We didn’t even need to list our home, and it sold. However, we were under contract toward the end of July. Because of certain limitations on the buyers, our original closing date was October 2. That’s more than two months. But because we were moving across the country, and we just wanted to unload the house, we accepted that we would have to keep making mortgage payments for two months.

While we weren’t thrilled about all of this, we were even less thrilled about the fact that we couldn’t get actual, final numbers. And the closing date kept changing as we approached. My real estate agent contacted me while I was in New Orleans for FinCon14. She said that the closing had been maybe?moved up. But then I heard nothing further and made the mistake of assuming that we were still on for October 2.

Then, on a Friday evening, at nearly 6 pm Eastern time, I received an email with documents that needed to be notarized. Unfortunately, because of the time, it was impossible for us to find a notary. I called around to see if anyone was open, and I did the same on Saturday. The earliest we could manage to get an appointment was Monday morning.

We were instructed to overnight the notarized documents as soon as we could. Meanwhile, I received a text from the real estate agent asking if we could close on Monday. I explained that the documents had arrived after EOD on Friday, and it wasn’t going to happen that early. ?And at this point, I still hadn’t received final numbers on what we would owe. I only had an estimate.

The closing did go forward, but it took a couple of days. We had to run to the notary. We finally got word on what we owed the day before closing. There was a lot of money transferring and frantic calls to my parents to save my butt because all the money I needed wasn’t going to get there in time. It was a mess.

You’d think, though, that there could be a better process for a real estate closing. You can get an amortization chart from the bank that tells you exactly what your balance will be on any given day in the next 30 years, but you can’t figure out what your final closing numbers will be on a HUD settlement until the day before you’re supposed to close?

Yes, an estimate gave us time to figure out what we would need and put it in a sort-of “holding” account until we needed it, but I was counting on an October 2 real estate closing, so when I started the transfer via ACH, I thought I’d have time. I didn’t think of the consequences associated with having the closing date moved to earlier. We didn’t want to keep the money in our primary account, though, because that’s a recipe for disaster. You need to keep these things separate so you don’t forget and spend.

But, in the end, after a lot of stress (which involved someone at my bank, who had to approve the wire transfer, being in a meeting?for two hours and almost not sending the money in time), it all went through.

The whole thing was a mess, with people assuming that money would be on standby, and it didn’t account for the fact that I was two hours ahead, and whatever. You’d think the process could be smoother. Like they’d know how much I would need to pay, and I could just put it in an escrow account until it was needed, or that I could have all the closing papers signed and held in trust by a lawyer or my accountant or something.

It’s really turned me off the whole owning a home thing. Well, I was turned off of it before. This just clinches it.

And the sad part? Apparently, my experience was normal.