Forming a home business with your spouse seems like a perfect idea — until you divorce.

For seven years, my ex and I had a business together. It didn't really feel like it. Mostly it was a partnership on paper. The LLC listed him as the general member, but the money made by the business was all the result of my freelancing. Our accountant set it up so that, on paper, most of the money was distributed to my ex. At the time, it didn't matter because we were married. It all went into the big pot.

Tax Advantage of a Home Business with Your Spouse

There is a tax advantage that comes with having a home business with your spouse. The main benefit derives from the way the money is seen by the IRS. If your spouse is a general member, and you are the managing member, the money assigned to your spouse isn't considered self-employed income if s/he has another employer. Or something.

The upshot is that the accountant's arrangement reduced how much I had to pay in self-employment tax, and it didn't affect our day-to-day finances because we were married. It was a pretty sweet deal. Until he asked for a divorce. Everything changed. Now I face the unintended consequences of trying to be clever with my tax situation. (My new accountant isn't nearly as creative, but at least I know things aren't going to be surprisingly awful later.) 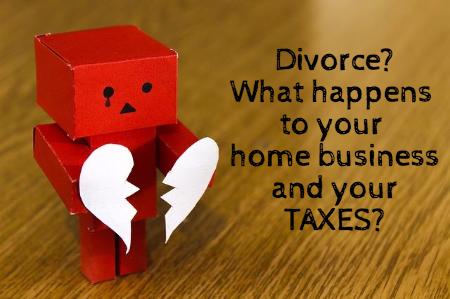 The Fallout: What Happens When the Marriage Ends?

For the most part, our divorce was smooth and free of drama, and relatively inexpensive, even though I probably used shopping therapy more than I should have to get through some of the tougher times. My ex and I are pretty good friends, talking a couple times a month, and texting a few times a week. We're looking forward to a family vacation in July. The difficult part arrived at tax time.

When we first talked divorce, I contacted the old accountant. He assured me we could divide up the business as we wished, as long as we dissolved it,?and that the income could be assigned as we wished. The new accountant?cured me of these notions. In the end, our combined tax bill, for federal and state taxes (in three different states), was right around $25,000. Here are some of the consequences of getting clever when you have a home business with your spouse and the marriage ends:

Many of these issues don't matter when you have a home business with your spouse. All the money goes to the same place. You have a joint retirement strategy so it doesn't matter who ends up with the benefits. But what happens when someone decides to bail?

The accountant thought he was helping us, and I thought we were being smart about tax planning. It worked well and saved us thousands of dollars for seven years. But now the reckoning is here. My tax bill will be much, much higher going forward, and I'm missing out on benefits that should be mine. We don't like to think of divorce, but it's always a possibility, and it's imoprtant to prepare for that — and realize that divorce comes with a lot of unintended consequences and harsh financial realities.