This morning, my eight year old son retrieved the Sunday paper, and was greeted with an image that is familiar to most of us: Billowing smoke and flame. “The Day the World Changed,” he read out. “What happened?”

So I told him. 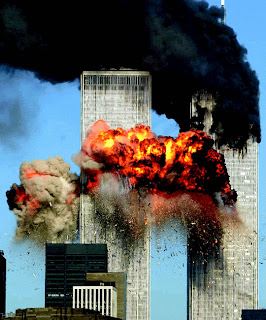 Of course, most of us have been reflecting on the 10th Anniversary of 9/11 for a good part of this past week. A shared moment in time, due to its horrific magnitude, like the Kennedy assassination or the Challenger explosion, the attacks of 9/11 transcend location; you remember where you were and what you were doing.

That morning was odd for me. I woke up, and began getting ready to attend class in my dorm room. Normally, lI would watch CNN while going through my morning routine. For some reason, I didn't have it on that morning. One of my friends called. “Can you believe it?” he demanded, assuming that I knew. “What?” I asked. (If I'd a clue, I wouldn't have needed to ask.) “Um. Only the possible deaths of thousands of people…”

At first, I thought it had to be a joke.  I went kind of numb. At the time, I didn't know anyone affected. But it still felt personal. Interestingly enough, the first class I attended that day happened to be Middle Eastern Political Thought. The instructor completely changed the lesson to address the event and give us all a crash course on Osama bin Laden, and other pertinent tid bits related to the situation.

I also spoke with my Muslim friends that day; all expressed sorrow and outrage.

In the days that followed, though, and every year since, I have been somewhat encouraged by the drawing together of most of our people. While the prejudice expressed, and the excessive hatred and labeling that still goes on, from all sides, it is encouraging that we as a society have made the move to commemorate 9/11 as a day of service.

And it is encouraging to know that we still have real heroes to honor.