Once again, Monopoly proves it can teach valuable lessons about money. This time, my observations come from Monopoly Electronic Banking.

For Christmas this year, my son received Monopoly Electronic Banking

as one of his gifts. He was very excited to bring it to my parents’ home and play it. We spent a little more than three hours playing Monopoly one of the days of our trip.

The updated version of Monopoly requires everyone to use cards for their money. There is a simple card reader that keeps track of all of your transactions for you. As we played the game, which was fun because it’s always kind of fun to play Monopoly, I thought of some of the ways that game play is a little different with the updated version, as opposed to the “classic” version, in which you use cash instead of a card. 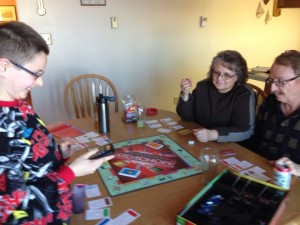 There are always lessons learned from playing Monopoly. And the new version offers a different set of lessons.

First of all, I was reminded that it’s easier to spend more money when you have a card instead of cash. Of course, part of the reason for this is due to the fact that Monopoly Electronic Banking deals in bigger amounts of money. You start off with $15 million. Everything costs more as a result. Since you don’t have to keep track of bits of paper, the game has “upgraded” the amounts of money involved.

But I noticed something else. Without the cash in front of us, it was harder to keep track of what were spending, and how much we had left. Even though the rules still allow for a banker to manage all of the transactions, we decided to start passing around the device so that we could all help manage our transactions — and see how much money we had.

It’s easier, with credit cards, to just hand over the plastic. As a result, the consequences of the decisions aren’t as painful Not only is it easier to make impulse purchases with a card, but it’s also harder to keep track of how much you’ve already spent, and where you stand with regard to how much money you have left. My friend Joseph Hogue shares a number of tricks credit card issuers use to get you to spend more without thinking about it.

This was very evident with Monopoly Electronic Banking. It was much harder to see where the money was going, and to get an accurate idea of how much was left.

Plus, there is no way, as there is with the cash version of Monopoly, to set aside money for purchases of specific properties that you want.

Bigger Numbers are Harder to Grasp

We all know that there are certain numbers that just boggle the mind. It’s hard to grasp certain numbers that are so big that they defy our own experience. The same principle can be applied to money. It’s hard for us to truly understand some of these large numbers. Even getting the hang of millions and hundreds of thousands can be difficult.

The nice thing about Monopoly Electronic Banking is that it does break it down a little bit. The card reader’s display uses a decimal system, so you might have 3.245 million left partway through the game. However, it does take a little getting used to, since some transactions take place in the 100k range, so you watch the digits to the right of the decimal drop.

In many ways, getting used to the display of numbers in the game is a lot like training yourself to understand large amounts. But, once again, it’s harder for your mind to grasp these amounts. Studies indicate, for example, that university students regularly experience “sticker shock” when they realize how much money they owe in student loans at the end of four years. It’s hard, when agreeing to a loan arrangement, to truly understand what it?means to borrow that much money. Something similar happens when playing the new version of Monopoly. You just don’t “get” numbers in that amount intuitively. It takes some getting used to.

In the end, we had a good time, and I was able to draw some parallels between Monopoly Electronic Banking and real life money psychology. The updated version of the game changes the way you play the game, just as the changes in money over the last few decades have altered the way we interact with money in real life. It means that we need to be careful, and pay attention to what we’re doing.

What do you think? Are there lessons you’ve learned from playing Monopoly or some other money-related game?