This is a guest post from my sister, Rachel, whose husband sells solar power systems through Vivant. They've been trying a solar system on their own home, and this is her story. Another interesting take on solar power can be found at Lazy Man and Money, where my buddy Brian shares his experience with a smart solar system to help power his home.

It used to be that when you bought a house you were stuck with whatever company provided utilities to that location. Not so anymore. You have options. One of the most popular and affordable options is solar. You can go out and buy your own system (and maintain it) for a substantial cost, or you can switch to a solar power provider like Vivint or Solar City and have them foot the bill instead. 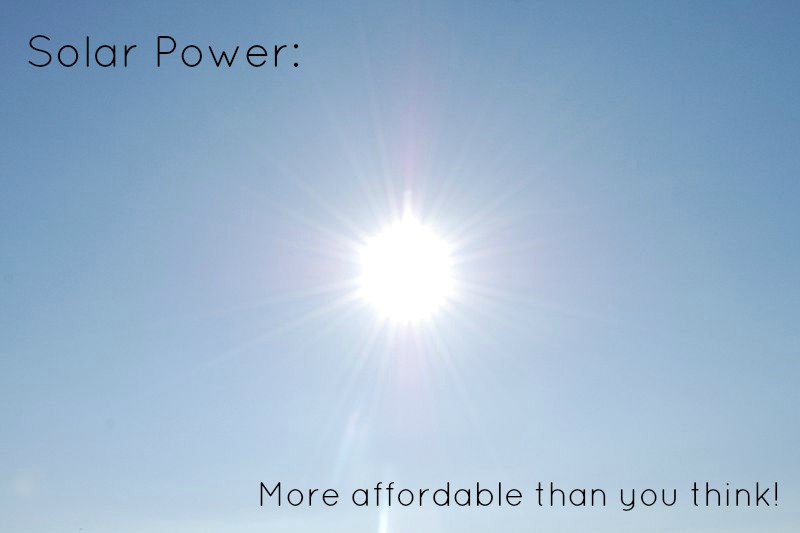 An Affordable Way to Add Solar Power to Your Home

The benefit of using a company is that they do all the legwork and maintain the system for you. And you can cut your electric bill in half. When I first started looking into this option I was not buying it. Really, not buying it. How can the company install a system like that on my roof at no cost to me? How is this being paid for? Every company has operating costs and for Vivint it?s buying panels in bulk and installing them. They don?t have to mine, dig, drill, refine, and distribute the electricity they generate; it comes from a renewable source: the sun. This is also the reason they can offer a lower rate — a much lower rate.

The current rate (in my area) Vivint is charging is $0.115 per kwh. They also have a 20-year contract that states the rate won?t increase more than 2.9% per year. The current rate for National Grid (the area?s current provider) is $0.24 per kwh. AND they raised their rates by 37% last winter. Even if Vivint raised their rate at the max of 2.9% and National?never increased their rates ever again, in 20 years, I will still be paying about 4 cents less per kwh for Vivint than I pay currently at National Grid. The savings start out great and get better with time.

This is how it works: You pay the solar company for the amount of energy that you produce (I know, it sounds backward) and you pay your current provider for what you use. Wait! What?! How does that save me money?

What do you think of this method of using solar power to reduce your?overall electric bill? Do you like the idea of letting a company essentially use your?home as a way to generate solar power? Do you have experiences with solar power that you want to share?