I find our national priorities interesting — and disturbing.

Estimates say we will spend nearly $1 trillion over the course of 10 years (although if you believe the CBO, it will pay for itself by that time, and the net cost will be $0) on providing more people with access to affordable health care. This will arguably also save thousands of lives, since lack of access to health insurance and medical care claims some 45,000 lives a year, if you believe a study published in the Journal of Public Health.

Deficit hawks insist, loudly and angrily, that we can’t “afford” a program that will save lives and provide more access to medical care. They even ignore the fact that this means more customers for the health insurance industry and the pharmaceutical industry, both of which have decided to embrace the fact that this is not federally controlled health care, and they will still be able to set their own premiums and prices. Health insurance companies will just no longer allowed to deny coverage to people based on health, and they can no longer break their agreements with customers who pay their premiums faithfully. Insurance companies will still be very much in charge, but they will have to compete more in the marketplace now, offering a wider range of plans. (I thought we liked increased business competition in this country, but maybe not…)

But back to our priorities. Where have these deficit hawks been over the past few years as the price tag for the unnecessary Iraq War has ballooned? The New York Times offers this, from a story written two years ago:

Five years in, the Pentagon tags the cost of the Iraq war at roughly $600 billion and counting. Joseph E. Stiglitz, a Nobel Prize-winning economist and critic of the war, pegs the long-term cost at more than $4 trillion. The Congressional Budget Office and other analysts say that $1 trillion to $2 trillion is more realistic, depending on troop levels and on how long the American occupation continues.

We are now seven years in, and the Iraq War has cost us more than $700 billion so far. If we go for another 3 years, I’m sure the 10 year total for the Iraq War will likley be close to $1 trillion — making it roughly equivalent in cost to health care reform. 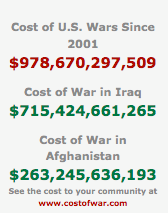 But we the people aren’t going to be recouping that war money, like we are likely to do with the cost of health reform. And, of course, instead of providing health services and saving lives, the Iraq War has claimed the lives of more than 4,000 soldiers, and tens of thousands more soldiers have been wounded. But nobody seems concerned about that. And there was no screaming about the deficit back when Larry Lindsey was being fired from the White House for estimating that the Iraq War would cost three or four times what Bush Administration officials kept saying publicly. Even the Pentagon warned, at the beginning, that costs for the Iraq War could get out of hand. But there were no deficit hawks yelling about how we couldn’t afford it. No one even seemed too upset, either, when billions turned up missing in Iraq.

I find our national priorities disturbing. We rail against something that will help us care for our own people, and are, at the same time perfectly content to pay the same amount of money for things that do not help us, and that result in death and destruction.

It’s disturbing to me that we are more upset about expanding health care coverage to our neighbors than we are about sending them to a foreign country to die.