But, really, it's just rude. And it sort of takes away from some of the interesting points that the article makes. It also begs the question: Would Businessweek have felt it “safe” and “appropriate” to mock another religion's sacred moments?

Ah, well, we all know that Mormons are among the last acceptable targets for religious intolerance.

I think the Businessweek article makes interesting points, and reveals interesting information and estimates about church assets. I would like to see more detail, from the church, on how the church uses its money, and what the holdings are. The cover, however, detracts and distracts from some of the valid points in the article. 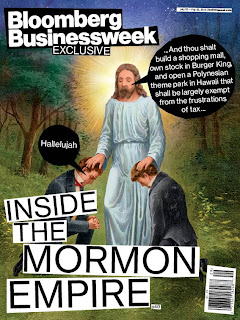 Instead, the cover pretty much forces the reader to assume that Businessweek doesn't like the LDS Church, and is more interested in a takedown than anything else. The church is trying to tell its side of things, of course, but I think that more people read Businessweek than they do the Deseret News.

Yes, I'd love it if the church would be more forthcoming with this information. I'd love regular reports on income, and how the money is used. It would be nice to hear something beyond the assurances that tithing money isn't used to fund BYU athletics. (The Businessweek article was vague on the difference between what they think tithing money is used for, and what they think other monies, from other sources are used for.)

But if Businessweek is going to throw estimates of income assets out there, the least they could do is estimate the expenses that the church incurs as well. And it would be nice if the assumption wasn't that the Humanitarian Aid program is the be all and end all of the church's charitable efforts.

And there is no call to be so blatantly rude with the cover.