My trip to the grocery store provided me a much-needed reminder of my penny pinching days.

Honestly, though, I'm glad I had this small reminder of what it's like to try and make a little money go a long way at the grocery store. Sometimes we forget what it's like for others — and my experience wasn't dire. 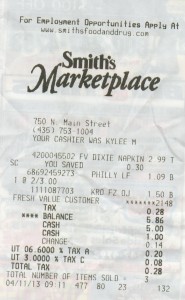 Grocery Store Challenge: $7 to Get Needed Items at the Store

I usually run my errands on Tuesday, and this week was no exception. However, I forgot to check the paper products, and I forgot to look at my son's ingredient list for this week's 4-H cooking experiment. Yesterday, we ran out of napkins, and I realized that we were missing frozen orange juice and cream cheese for my son's recipe.

I wrote the three items down, and promised my son I'd pick up the necessary items this morning after my swim. As I re-entered the car after my exercise, I realized that I had my phone and my driver's license, but not my wallet. An extra trip seemed inevitable.

Then I remembered that I keep a small amount of money in my car. It's usually ones and maybe a five, in order to pay parking fees or for other small costs.

I did have money! After checking, I realized I had $7. You can get three items for less than $7, right? Especially if you go generic.

To be honest, I've not looked at the prices on grocery items in years. We get certain items, and certain brands, and we have milk and produce delivered to our door.

I got lucky that the cream cheese-like item I bought was on a manager's special, and that the frozen juice was two for $3 today. I ended up doing it for less than $6 — barely — but I was a little worried when I started with the napkins, and saw that they were $2.99. But it worked out.

My empathy for those who are forced to count their coins and pinch their pennies was renewed after today's experience. Sometimes, we can distance ourselves from the plights of others when we are removed from them.

It's true, though, that this wasn't exactly a scary experience. If I had been unable to get what I needed this morning, I would have just headed back to the store after returning home for my wallet. The only consequences would have been slight annoyance and a wasted half hour. This is different from those who actually have to make those tough decisions.

Today's exercise reminded me that there is no way I could live on minimum wage. Memories of pulling out the mini-calculator in the store and carefully keeping track so that my husband and I could keep the grocery bill to less than $30 for the week (cheap hot dogs and $1 frozen meals, anyone?) followed me as I left the store.

I hope I don't have to go back to penny pinching anytime soon.