We all have different ideas of what it takes to be?rich. What would make you feel wealthy?

We all like to think we're middle class.?Even if you make enough to?technically kick you out of the middle class, you probably still think of yourself as middle class — although you might mentally refer to yourself as?upper middle class (but you would never?say?that out loud).

The idea of middle class holds appeal to most of us because it conveys that you are “just like folks,” but that you also have achieved some level of success. Being middle class is about being?comfortable, financially and psychologically. 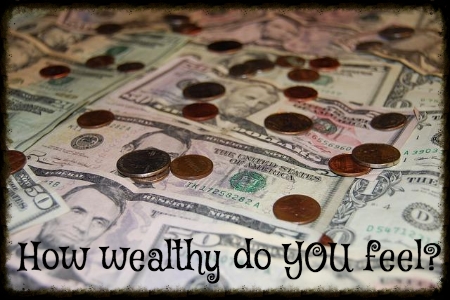 Ideas of wealth are far from cut and dry. What constitutes “being rich” is something that has more to do with individual experience than anything else.

“Wealthy” is a Moving Target

The other day, my son had a friend over. They were looking at my son's Lego collection and some of his other toys. As they used some of the loose Lego bricks to build whatever they wanted, the friend casually asked, “Are you rich?”

My son didn't really know what to say, I don't think. All he could really say was, “I dunno.”

We talk about money at home. At least, we talk about financial choices and investing and the basics of money management. We don't talk specific numbers involving income and bills and what-not. While our son certainly knows that we make money (and that I make more than my husband), and we pay bills, and we save up for big purchases, but we don't get into specific numbers.

My son clearly didn't?have something to go on, so I wasn't really surprised when he asked me later if we were rich. I carefully answered that our family probably has a higher income than many of the people in our neighborhood, but that we certainly didn't have an income as high as others.

That is the thing about being wealthy. Nobody really thinks they are rich. Politicians and pundits might ascribe “wealth” to those who have $250,000 in income, or we might consider someone with a net worth of $1 million to be wealthy, but we don't really think in those terms when it comes to our own financial situations.

What's even more interesting, though, is that even millionaires don't think they are wealthy. Last year, ABC News reported on a survey from UBS that indicates that only 28 percent of those with between $1 million and $5 million in investable assets feel rich. So, while non-millionaires assume they would be wealthy to have $1 million in investable assets, a number of those who actually have that kind of money don't believe that they are, in fact, rich.

Wealthy is often a matter of where you stand in comparison to others, as well as whether or not you feel as though you can do what you want, on top of fulfilling your basic survival needs.

We are driven to compare ourselves to others, and as long as there is someone who makes more money than you do, you are unlikely to feel wealthy — no matter how much you make.

Do You NEED to Feel Wealthy?

Of course, the next question is this: Do you?need to feel wealthy in order to consider yourself a financial success?

If you base your feelings of success entirely on sheer numbers, then it's very difficult to feel as though you are a success — unless you make the Forbes Billionaire List. You might also compare yourself with others to determine whether or not you are a success. If you think more in terms of whether you have more or less than your neighbors, your entire self worth might be based on your perceived net worth as compared to those around you.

But we don't all need to feel wealthy. At least, feeling rich doesn't always need to be about comparisons to others. In a number of ways, wealthy is more about how you feel in terms of your own life and finances.

It's easy to get caught up in ideas of wealth inequality, and the growing wealth gap is something to be concerned with in many ways. But, on a personal level, it's probably more important to focus on what you can do to be reasonably comfortable, even in the face of systemic wealth inequality.

Some of the items that might help you feel wealthy — even if you might not think you are rich — include:

In many cases, feeling wealthy is a matter of your individual circumstance. Where you live, what you choose to spend your money on, and how content you are with what you have has more to do with whether or not you feel wealthy.

Do you feel wealthy? Why or why not?

9 thoughts on “At What Point Do You Consider Yourself Wealthy?”