Since finding a way to talk to an actual human about my Google Authorship and G+ profile isn't an option, this is where I vent.

I possess an extensive vocabulary. There are hundreds — nay thousands — of words that I could use to describe what is happening with my G+ profile right now. But none of them do the job quite as well as the following:

As in: This. Is. Complete. Bullshit.

I've been excited about the idea of Google Plus for awhile, mainly because of the Google Authorship feature. As a prolific freelance writer (dare I say the most prolific in the personal finance space?), Google Authorship seems perfect for someone like me. After all, I can list the places I write in one, easily searchable location. And I can link back to the profile from where I write (places like U.S. News & World Report and Huffington Post) to show that I have some authority.

And if Google Authorship is really the wave of the future for Google and search and establishing authority, I've got it made in the shade.

Except that now Google thinks that maybe Google Plus isn't for me. 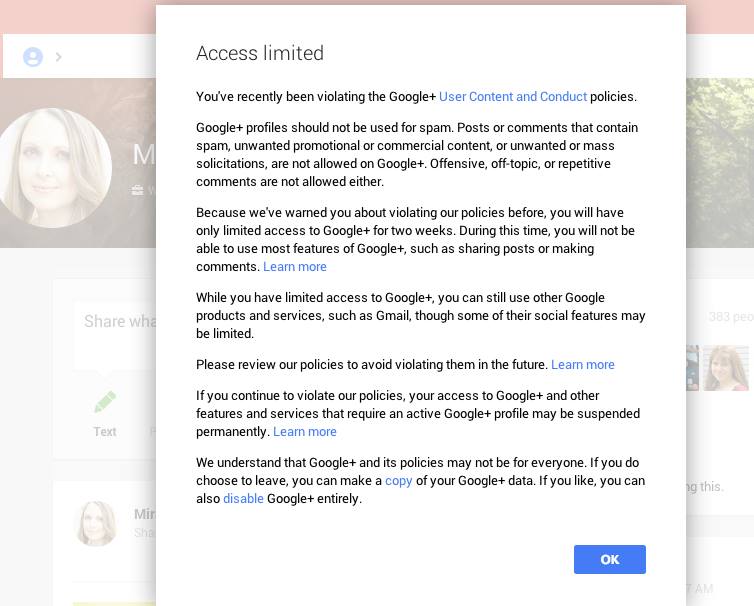 Yes, my Google Plus account was suspended a couple of weeks ago. I submitted for review, and the suspension was lifted. However, because plebes like me can't talk to a human at Google I still have no real idea of what the problem was. I share stuff I've written. I share stuff that others have written. I use the +1 button on other people's stuff. Sometimes (but not very often) I make comments.

Now, though, I'm once again being warned about spam, and I have no idea what the problem is. As far as I can tell, none of my stuff is overly promotional. I don't repeat comments. I'm not pushing commercial content. I don't aggressively add people. In fact, I rarely initiate an addition to my G+ circles. I share publicly, and with my “Blogging” circle, but I thought we were supposed to share publicly.

Anyway, supposedly Google Plus is tailor-made for people like me: Prolific writers who have worked to build somewhat authoritative voices in their subject areas. But maybe Google doesn't want me using the Google Authorship.

And I have no idea why.

There are those who are just abandoning Google products, since they don't seem to be keeping up with the “Don't Be Evil” motto. I mean, I get that you don't want spam. However, as far as I can tell, I'm not spamming. There's been discontent about the SERPs and how the “big guys” are pushing out high-quality small guys, as well as how low-quality small sites churn and burn to get rankings. Between the promoted posts and churn and burn, many smaller high quality sites are lost in the shuffle.

Google Authorship looked like a step to fix some of that. With authority determined not by links, but by who is writing the posts.

There are concerns that Google will yank a service that many find valuable (Google Reader, anyone?), and worries others that Google may start actively doing evil in the name of the almighty dollar. But none of that really concerns me right now.

What concerns me is the fact that my Google Plus profile and my Google Authorship are in jeopardy, even though I'm pretty sure I've done nothing wrong. This is just what I need: Another reason to hate social media.

It's even more concerning that I can't talk to anyone about what I need to do to placate the Google gods. Death by algorithm is a very real concern for many blog owners and small businesspeople. I thought I didn't have to worry about it, because I don't worry much about the SERPs.

But, apparently, I do have to worry about it.

0 thoughts on “Prolific Writer? Maybe Google Authorship Isn’t for You After All”