Many of us don't think about what spousal benefits might be worth. However, the SCOTUS DOMA ruling offers some insight into what many people have been missing out on.

Yesterday's ruling by the U.S. Supreme Court on DOMA?and Prop 8 have some gay people cheering. These are people who probably?did?know what they were missing out on for years. And that's why there was something of a fight. They were fighting to secure the sort of spousal benefits — legal, tax, and employment — that you might take as a matter of course if you are a married heterosexual.

What were same-sex couples missing out on that many of us take for granted? Spousal benefits. For instance, my husband gets health insurance through what I do, since he's my spouse. We also have that peace of mind that comes with knowing that if one of us dies, there's a Social Security benefit due to the other, because we're married. And we can file our taxes jointly, keeping us, combined in a lower tax bracket and reducing our overall taxes (I've done the math; we'd pay more as a household if we filed separately). 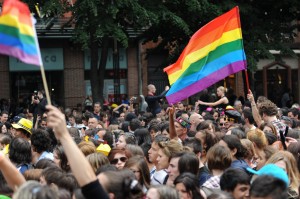 While there has been progress over the years in states allowing same-sex couples to enjoy some of the same spousal benefits that heterosexual couples have nearly always enjoyed, the fact of the matter is that the federal government didn't recognize those partnerships, and that had a number of tax implications, as well as implications for Social Security spousal benefits, and employment benefits.

Now that aspects of DOMA (and California's Prop 8) have been ruled unconstitutional, many same-sex partners will have access to spousal benefits that they might not have had before. This includes, but may not be limited to:

When you start to think about it, the number of benefits that our society confers on married couples is rather large. And many couples were excluded from this situation for many years. Now they have access to many valuable spousal benefits that may not have been available before (plus, some couples might be eligible for tax refunds).

Does This Mean Marriage for ALL Gays? No.

This doesn't change things as far as states are concerned; SCOTUS left it up to the states to decide whether or not to recognize a same-sex marriage from another state. But, at the federal level, homosexual couples have access to the same benefits that heterosexual couples already enjoy.

For some, that can mean a big difference. The value of the benefits tend to strike a chord at the emotional level as well as at the financial level. And, while same-sex couples in certain states still have a long row to hoe in order to get some of the spousal benefits that others enjoy, they do at least have the ability to file jointly (as long as they go somewhere it's legal to get married).

What do you think about spousal benefits? Are they valuable to you?