It's the first tax season in which the federal government recognizes same-sex marriage. Are your same-sex finances ready for a new world?

This means that same-sex finances have just become more interesting. Now same-sex couples need to tackle issues that they didn't really need to worry about before — and even deal with issues that opposite-sex couples don't have to think about.

First of all, it's important to understand that, in the new world of same-sex finances, not everything is all that different. Not every state recognizes same-sex marriage, and the SCOTUS DOMA ruling did nothing to change that. As a result, if you are legally married in one state, and you move to a state that doesn't recognize same-sex marriage, you have to file your federal tax forms with some type of “married” designation, while your state taxes will still require you to file as single.

This type of filing status confusion is something that heterosexual married couples don't have to worry about, but that same-sex couples need to consider. Make sure you understand your tax filing situation at the federal and the state level. And realize that civil unions don't “count” for federal filing. So if your state recognizes civil unions for same-sex couples, you still can't file as married on your federal return.

Another consideration is whether or not to amend past tax returns. It's possible for same-sex couples who have been legally married during past years to amend their returns and possibly see bigger refunds. Depending on your financial situation, it might be worth your while to amend your returns up to three years in the past. Run the numbers to see what is likely to work for you.

Like heterosexual couples, homosexual partners now have to decide whether or not they will be married filing jointly or married filing separately — at least for the federal return.

Same-sex couples are also now subject to the so-called marriage penalty. If you both have high incomes, you could actually be hit with a higher tax bill than you are used to as a couple. Once both partners reach a certain income level, and if you have similar incomes, there is a good chance that your tax situation just becomes more expensive. Marriage comes with a host of tax-time financial pitfalls as your income increases, and it's important to be aware of these realities.

Also, it's worth noting that there are a host of situations in which you can now claim credits and deductions as a couple, if you file jointly at the federal level. As you work out your same-sex finances this tax time, it might be worth it to visit with a tax professional who can help you identify the issues and help you create a plan. 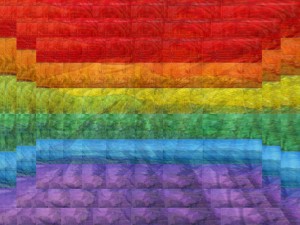 It's not just taxes, though. Same-sex finances come with other issues, now that you might be married. Lindsay Sacknoff from TD Bank offers a few insights into some of the issues that same-sex couples need to work on if they have recognized marriages. “Now that you're married, you may be starting to consider buying a home or starting a family,” says Sacknoff. “If this is the case, make sure your banking options are helping you financially prepare.”

Sacknoff suggests that same-sex couples consider premium bank accounts. “LGBT people tend to earn more than their heterosexual counterparts,” she points out. “Same-sex couples with the ability to keep a higher balance in their bank account may benefit from choosing a premium account.”

These premium accounts often come with bonuses like higher yields on money market checking accounts and other accounts. You can also find premium accounts that waive monthly fees when you maintain high balances, or have good relationships with the bank. (My own money market account waives fees with a $10,000 relationship, so my combined balances in my HSA, business account, money market checking, and line of credit all combine to help keep me fee-free and earning a higher yield.)

Many same-sex couples managed their finances like unmarried couples in the past. Now, though, with marriage becoming more common, same-sex finances are changing. It's important to consider the pros and cons of merging finances, and figure out the best way to make your finances work, whether you choose separate accounts, joint accounts, or a combination.