In the age of social distancing and stay at home orders, work from home is becoming the normal (at least for white collar workers). But will this have a long-term impact on the future of work? I'd like to see it.

When we think of work — at least for white collar employees — we envision a workweek of between 40 and 60 hours, depending on the situation. Often, it requires going into an office for at least eight hours a day. Maybe you have a salary. Maybe you work hourly. Either way, you have to show “proof” that you're “working.”

The whole thing is ridiculous.


As we face a global pandemic and people are asked to work from home, we're seeing a bit of a shift. But will this change the future of work? We can hope.

For the most part, this post deals with white collar workers. The folks who go to offices and, quite frankly, can do a lot of their work from home without it making a big difference.

And, when you consider this, the reality is that the way we measure productivity makes no sense. The idea that your butt needs to be in a seat in some office for eight hours a day is ridiculous when you consider our technology and the value of work done. (Shout out to my friend Jason Vitug for getting me to think about this.)

Putting in 40 hours doesn’t necessarily mean you’re being productive or useful. I’d like us to shift away from an hourly mindset. If you can get the job done, and done well, why force more meaningless hours on people? https://t.co/oEeasR5vts

The idea of working hourly makes sense in a factory if you're standing on a line, and you need to do the same thing over and over again. (The impact of automation is a discussion for another time. And the idea of getting a living wage is another issue for a later time.) It might even make sense in some other workplaces, like food service or for a cashier at the store. However, with many office jobs, it makes no sense.

With many office workers, the concept of hourly pay is silly. The results they produce aren't always based on hours put in. And if you can do a job in less time, and maintain quality, why should you be penalized for it by being paid less because you clocked out early?

Even worse, why should people be required to hang out in an office when they aren't actually doing anything productive? The use of an hour to measure productivity is outdated and stupid — and basing pay on it is just as pointless.

How Productive Are You, Really?

When looking at the future of work, it's important to recognize a few things. Various think-pieces and experiments have looked at how you're actually better off with a workday that's more like four hours to six hours long.

Think about your own workday. Consider how much of it is taken up by:

If you were allowed to prioritize important tasks, get in the “zone” and be able to just go for it, could you accomplish your work sooner?

Like, for real. What if you could do what needed to be done from 10 am to 2 pm, while the kids are at school (yanno, after all the social distancing is over), and then follow up with a little work from home from 7 pm to 9 pm after you've had family time?

What's the point of being in an office for those hours just because it's something that came into vogue 100 years ago when technology and work were completely different?

I don't work 40 hours a week — and hopefully never will

Most of my money-making work is done in the morning, when I'm most productive, while I'm still in my pajamas. And it's usually done within three hours. Tangential work, including emails, interviewing others and research, is done at different times and is also usually accomplished in two or three hours at a stretch. I rarely spend more than 25 hours a week on activities directly related to writing for money.

And, I'm probably more productive than many white collar workers putting in more than 40 hours a week, at least according to research compiled by The Week.

The data revealed an M-shaped curve. The curve rose steeply at first and peaked at between 10 to 20 hours per week. The curve then turned downward. Scientists who spent 25 hours in the workplace were no more productive than those who spent five. Scientists working 35 hours a week were half as productive as their 20-hours-a-week colleagues.

I get a lot done in a surprisingly short amount of time.

So, if just being at work for eight hours doesn't guarantee more productivity, why are we requiring people to put in those hours? Why do we think that you have to be working at least 40 hours a week to be a useful member of society?

The Future of Work Should Focus on Results

Stop marking hours as the main measure of productivity. Stop pretending that more time at the office is a virtue. The future of work should be about results.

I worked for a startup that didn't make us track hours. They didn't care when I got the work done. We were a fully distributed company. And that company sold for $60 million in 2018. We built something great. And we did it because our CEO and other top executives trusted us.

They knew we'd do our work — and do it well.

The new company, though, wasn't as accommodating. They wanted us to clock in online. We were expected to work during “normal” hours. Rather than trusting us to do our jobs and turn in good results, they just wanted to count hours, afraid we'd “pull one over” or something.

Part of the issue is that we live in a very paternalistic society that doesn't recognize the value of what someone does. Additionally, this view looks at workers as children who are trying to get out of something or trying to bilk the system. It doesn't recognize that most people actually just want to get paid what they're worth.

The future of work should be about outcomes. If you need to put together a presentation, does it matter if you did it between 9 am to 5 pm and did it at the office? If the presentation is good, does it matter that you spent five hours on it rather than nine? When the job is done and done well, who cares where or when it was accomplished — or how long it took?

Are you doing your job? Yes? Then you should be paid.

Rather than focusing on hours worked and using that as a metric for pay, we look at the end product.

The sad thing? Productivity has been on the rise, and we don't value that as much as we should, either. 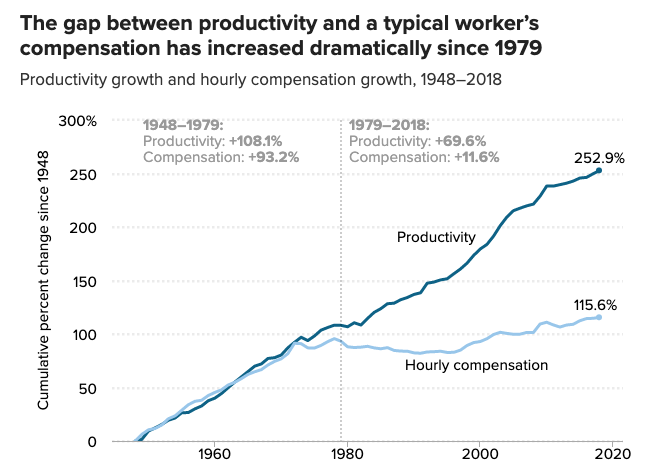 Unfortunately, rather than looking at results, many workplaces are instituting Big Brother policies during this time. You have to log in to some sort of software and be “active.” You're expected to get dressed and have the same ineffective meetings.

When we shift back to “normal” will we have a different mindset around work? It depends on how long the current situation lasts — and whether it changes our view of what work means.

The Future of Work Must Balance Life

The current situation forces us to see that any future of work should take a look at life as we live it. I'm fortunate because my situation allows me to:

As technology changes and as what constitutes “work” evolves, we have to consider that what we do to earn money probably isn't going to define us.

With more jobs being eliminated due to various factors, we might have to recognize that our expectations are outdated. There might not be enough 40-hour jobs out there for each person to earn enough to cover the basic necessities. We already know that many people can't make ends meet, even when they work 50 or 60 hours (and multiple jobs) per week.

We need to look at how work integrates with life and how work is about more than just punching a time clock. With a change in the future of work, we might also need to consider the concept of benefits. I mean, we're in a health crisis, people are being laid off and they're losing their health insurance — if their job even provided it in the first place.

The future of work should consider how we actually live our lives, and whether our work fits with that. None of my clients cares if I do my work in the morning or at midnight, or whether it takes me two hours or four hours to write something, as long as the copy is relatively clean and on deadline.

Many white collar jobs are the same. For many office jobs, the time of day something is done, as well as where the work is completed, is the least important thing about a task. Why can't someone drop their kids off at school before starting work at 10 am?

If a kid is sick, why can't you work from home that day, working on the presentation during naptime?

Technology and the nature of our tasks make most of office culture obsolete. So why do we insist on sticking with this idea of white collar work?

The longer this state of affairs continues, the more likely we are to see the problem with our current approach. However, if we're “back to normal” within a relatively short period of time, I doubt we'll see a revolution anytime soon.

What do you think? What does work mean to you? And is hourly the only way it can be measured? 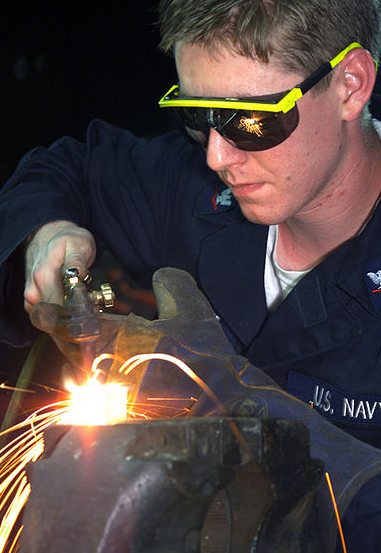 2 thoughts on “The Future of Work — Will We See a Change in (White Collar) Work Due to Social Distancing?”