As a freelance blogger, I think it would be great if social media web sites didn't matter so much.

I'm a freelance blogger. As such, I am well aware that submitting to social media sites is a must. But I'm not overly fond of doing it. It's time consuming. Especially since each social media web site wants you to be part of the “community.”

But I try to be a decent member of the communities I belong to. I have a few core social media web sites that I submit to regularly. They are niche sites, since most of my freelance blogging deals with finances:

I also submit to my friend David's site, Zoomit.ca, when something of mine is published on a Canadian-owned blog. And, occasionally, because I write about health, I submit to HealthBuzzing.

It's on these niche sites that I feel a true sense of community. You meet people with similar interests. Yes, I have accounts on Reddit, StumbleUpon and Digg, but I don't feel the same sort of connection to other users, and I don't think it's worth my time to build up a great account.

All that time building a killer account could be wasted if I am banned. 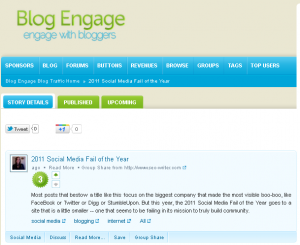 I wasn't exactly a model group member at BlogEngage. I voted for my friends, and submitted between one and three posts a day. However, I did take the time to look through the other submissions on the site and vote for items that looked interesting. I didn't often make the front page on BlogEngage (which turned out to be a good thing, due a recent purge of people who — without using BlogEngage's paid services — consistently made the front page).

As a result of my relatively low-key style on BlogEngage, I did manage to avoid the “purge” of accountholders earlier this week. The site owner claimed that he was getting rid of community members that didn't contribute high quality items, and that he got rid of vote riggers. Fair enough, I guess. It's your site; get rid of whomever you want. But in a community, you have to be prepared to explain why.

But why dump me? I'm not paying for the services he offers, true, but not a lot of my posts make the front page anyway. And I submit from a wide variety of quality PF web sites because I'm paid to write for them. They're not paying me because my stuff is complete crap.

I knew I'd be deleted from BlogEngage the moment I submitted a banned friend's side of the story: 2011 Social Media Fail of the Year. After watching the soap opera that was dealing with BlogEngage's owner for weeks, I knew exactly what would happen if I submitted that post. But I did it anyway, and was proved right in less than two hours.

But, whatever. One less social media site to have to worry about.

Back to Why I Have a Hard Time with Social Media

Don't get me wrong. Being a member of social media sites like Tip'd and BizSugar has introduced me to awesome people and has even aided my ability to land freelancing gigs. But I do wish that I didn't have to spend so much time on social media sites to be a successful blogger.

And one of the reasons is that you can lose all your hard work in link building through submissions if the site owner decides to erase your account. Site owners can do what they want. I get that. They can erase my stuff at will, because they own the sites. But it's nevertheless depressing to think that all my links and hard work — and social media submitting can be a huge time suck if you do it right — can be wiped out in an instant.

You have to decide what is going to be the best use of your time.

So, be careful as you choose your social media community. Personally, I've had better luck with small niche sites. Those are sites where you can really become involved and get to know people in your smaller area of interest. Bigger sites are easier to get lost in, and it takes more time and effort to become influential. As you decide where to contribute, take a look at the climate. You don't want to get stuck losing everything on a whim, and you don't want to spend a lot of time trying to be part of a community that rejects you.

The articles, posts, and resources on this website are for educational and informational purposes only, and shouldn’t be considered individual advice.

Always consult with a professional before making your own financial, investing, business, tax, and other decisions related to money and life.

This Page May Contain Affiliate Links

When you click on a link on this page or on an ad, I might receive a small commission. However, my reviews and editorial remain independent.