Everyone needs to make sacrifices during this tough time. That’s politicians of all stripes are saying. What they’re not adding is that when they say “everyone,” they really mean “everyone else.” We’re in the midst of a debt crisis, and we have politicians (who at least have had the decency to freeze their pay the last two years) doing their best to explain why Social Security payments, government employment pensions, and any number of programs are on the cutting block, but higher taxes aren’t even on the table.

It makes no sense. Okay. It kind of does. Us regular schmoes aren’t making huge, vote-buying campaign contributions to maintain the status quo.

I agree that some cuts need to be made, and that hard choices are coming. But the spending cuts being considered don’t exactly mean sacrifice for the big corporations raking in record profits this year and the wealthy who are enjoying some of the lowest tax rates in the developed world. If everyone were actually expected to sacrifice, we wouldn’t just be asking students to start paying student loan interest immediately. We’d be raising taxes on individuals making more than $500,0000, couples making more than $1 million and businesses making more than $50 million. That would be a way to raise some revenue without completely gutting the middle class and the small businesses that represent the backbone of our economy.

Sorry, folks. I don’t buy it. That’s trickle down B.S. at it’s finest. I’ve got 5 reasons why the argument that tax cuts at the top are beneficial for everyone is a huge load:

What’s spooky is that 4 of the 5 points above aren’t exactly being made by bastions of progressivism. There are plenty of economists from all points on the political spectrum that know that cutting taxes doesn’t mean revenue growth. It only works if you cut programs, too. It’s just plain fiscal irresponsibility to claim that tax cuts alone are good for our economy — and it’s dishonest to imply that top rate tax cuts are good for the middle class.
For more fun, you can see that we’ve seen better “real” growth with higher tax rates when you have a look at this chart. (Warning: This one is from the Center for American Progress.) 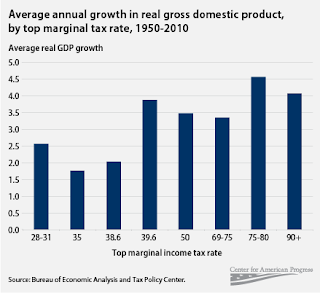 Indeed, during that magical economic watershed moment in history we call the 1950s, there was a top tax rate of more than 90%. Do I think we need such a high top tax rate? No, I don’t. I do believe that the rise of the middle class (a socioeconomic class that is shrinking at an alarming rate) was engineered, and that higher top tax rates had something to do with it. But I’m not an economist. However, Paul Krugman is Nobel laureate economist. And he charts the rise of the middle class — and its shrinkage right along with massive tax cuts — in The Conscience of a Liberal

.
Business Insider published this rather interesting look at the growing wealth gap we have in this country: 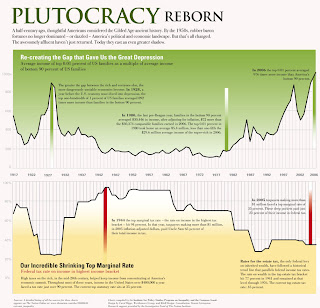 So, I ask again: Why is it that the diminishing middle class has to pay to get us out of this hole? Why should a shrinking middle class bear the brunt of this? Is there any reason why our system, which has been rewarding those at the top with greater and greater wealth for decades, can’t ask the rich be subject to a tax raise as the rest of us are hit by program cuts?
Indeed, according to the Congressional Budget Office, letting the Bush tax cuts expire would actually pay for the rising costs of health care in the coming decades. Here is what the Washington Post recently reported on a CBO analysis:

“If policymakers are to put the nation on a sustainable budgetary path, they will need to let revenues increase substantially as a percentage of GDP, decrease spending significantly from projected levels, or adopt some combination of those two approaches,” the CBO report said.

I, personally, believe that we should follow the third path: Decrease some spending, and increase some taxes. It’s not an either-or situation — and it shouldn’t be. Yes, government spending needs to be reined in. We need to decide on what our priorities will be, and we need to cut some of the fat. But we shouldn’t rely entirely on spending cuts.

If everyone’s going to sacrifice, tax hikes at the top need to be put in place.