I should be writing a primary program. The thing should have been written weeks ago, but I've been distracted by things like preparing for my book launch and playing a bigger role with the annual Plutus Awards (something for us financial bloggers). This weekend, with things winding down a little bit, and a lull in Stuff That Needs To Be Done, I should be writing a primary program.

But instead I'm reflecting on General Conference.

Like many Mormons, I use Conference Weekend as a time to listen and to ponder. Conferences like this encourage deep personal questions.

There are times when conference inspires me: I should do better! I can do better! I'm ready to be more Christlike! I want to be mindful of my fellow humans!

This conference, instead, felt like one big effort to put me in my place.

And that has me wondering where, exactly, my place happens to be. 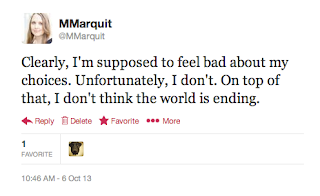 President Uchtdorf gave a rather nice talk on how there's a place for all of those who have left the church. He addressed items that aren't often addressed when speaking of those who “fall away.” This inclusive and happy, warm-fuzzy-inducing talk was surrounded on all sides by talks that make me wonder if there is a place for me.

Is there a place for a feminist who isn't particularly nurturing and who, honestly, doesn't derive much satisfaction from mothering? Is there a place for someone who listens to the Endowment ceremony, hears “preparatory to officiating in the ordinances of…” and thinks that maybe it's more of a practice/organizational thing that women aren't doing more in terms of leadership in the church?

I'm the primary breadwinner (although I do it from home), and there is a good chance I always will be. Sometimes I say bad words. I wear pants to baptisms. My husband is a far more patient nurturer than I am. Even though he has little patience with children in general, he still shows a greater aptitude than I for helping my son learn things. In fact, when you look at my marriage, pretty much everything is switched in terms of traditional gender roles. This household is so far removed from gender roles that my son thought it silly that I couldn't baptize him, and he had no idea that, in many homes, cooking and laundry are things that only the ladies do.

There haven't been many times in my life, from the number of kids I'm willing to have (thanks, Elder Oaks, for coming down on that) to the entertainment I enjoy, that I've conformed to traditional gender stereotypes — particularly those that often define Mormon women. Maybe I'm being overly sensitive (and perhaps some would call it knowledge of my guilt). But it seems like nearly everything in this conference, from the over-simplification of what feminism means and what gender equality efforts are meant to accomplish in society, to the seeming-chastisement over the fact that it's completely my own choice that I have only one child, was an effort to make me feel bad about my choices.

And to make me feel as though the world is about to end. Because, you know, gays. (The issue of whether or not we should be forcing our view of morality — whether or not we think it's God's law — on others via legislation is the subject of another post.) 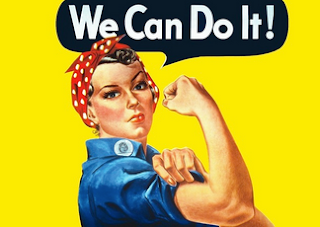 In spite of all the benevolent sexism preached from the pulpit, I do have reason to think that things are changing. (And that perhaps I do have a place.) My grandmother's brother, decades ago, believed that women would be ordained to offices in the Priesthood, alongside men, sometime within her lifetime — and he believed it would be a good idea. My grandmother may not live to see it, but I might.

See, despite the talks this session, I've noticed something. This conversation is happening. Much like the decision to start ordaining blacks to Priesthood again happened only after a few years of discussion amongst leadership, and those conversations happened in fits and starts, this conversation is taking place as well.

Is there some stonewalling? Sure. But I notice that those involved with Ordain Women aren't being denied temple recommends and they aren't facing excommunication. Twenty years ago, this conversation wouldn't have been tolerated, and the women would have been disciplined beyond a denied entry to the Priesthood Session and a statement about how the women are “sisters” and Church leaders “want them among us.”

Am I actively campaigning for ordination? I honestly don't know. What I do know is that it doesn't make me feel very welcome when it's repeatedly insinuated that I somehow don't have the right values, or that I'm not doing what I should because I don't feel and act like I'm supposed to, within narrowly defined gender roles. And I wouldn't be upset if women ended up serving in a number of positions only held by men currently (and, on another note, I'm not sure why a man who enjoys teaching children couldn't be a good Primary president).

There are precedents for women in prominent leadership roles. The language of the Endowment ceremony implies that women are prepared to officiate, even in the Melchizedek Priesthood, though right now we aren't ordained to offices in the church. So it wouldn't surprise me if we are headed, albeit slowly, in this direction.