It’s been a long time since anyone in Congress has come up with something I can agree with. Ann Kilpatrick (D-Ariz.) is proposing the Taking Responsibility for Congressional Pay Act, which, if in the unlikely event that it is passed, would result in the first Congressional pay cut since 1933. The Huffington Post reports on current salaries enjoyed by members of Congress:

Members of Congress earn a yearly salary $174,000, in either the House or Senate, with higher salaries for leadership positions. A cost-of-living increase is built into salaries. The median income in the United States is $52,175, according to the 2000 U.S. Census.

Economic Crisis Blog offers this illuminating visual look at how out of touch Congress has become with the financial realities of most Americans: 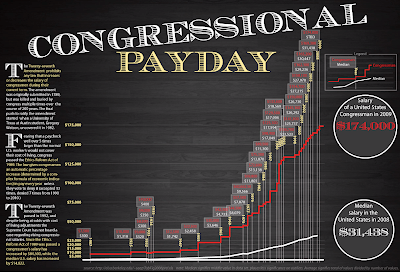 A few years ago, Congress voted to give itself automatic pay raises. They did this, of course, because they didn’t want to have to vote to give themselves pay increases, subjecting themselves to scrutiny. Members of Congress did agree to freeze their pay for 2010, but it’s not like they’re facing the same problems most Americans are. I think we should vote anyone out of office who doesn’t vote for a Congressional pay cut. Seriously. Pay attention to this one, and contact your representatives.

I think it’s time for a pay cut for Congress. The body has been wasting everyone’s time and money on partisan bickering, largely useless legislation and pork spending that doesn’t do much of anything for anyone. Not to mention the mess that health care “reform” has become. It looks nothing like anything anyone wants — except maybe the health insurance industry.

In fact, since Congress is kowtowing so much to special interests, maybe its time that forgo paying Congresspeople with taxpayer dollars altogether. It’s not like their doing anything for us.

3 thoughts on “Will Congress REALLY Cut It’s Own Pay?”