I do not like Black Friday. The consumerism and — at times — outright greed kind of bug me. Plus, I think it’s a huge waste of my time, since the deals can often be had online (with free shipping!) and I just don’t like braving the hordes to save a few bucks on something I really shouldn’t buy anyway. But I do like to talk about Black Friday with my brother, who has worked retail as a high school job, to get himself through college, and now seasonally as he and his wife prepare to continue their post-graduate educations. 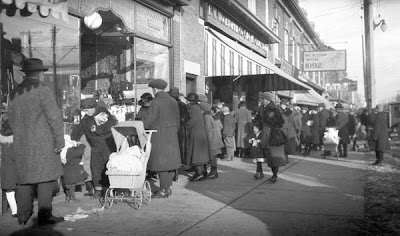 He had stories of lines stretching across streets and one idiot who shoved a cop. But my favorite story from yesterday was the woman whose Christmas he apparently ruined. She was looking for a kid’s over-the-door basketball hoop with electronic scoreboard. This toy is normally $29.99, but was being door-busted for $19.99. The woman ran up to my brother, normally a back-room guy overseeing receiving, who did his best to consult the deal cheat sheet (no luck) and page someone (also no luck), finally giving her his best with-a-caveat guess at two locations where the toy might be found.

The woman did not get the limited-quantity door buster. When she saw him again she made sure that she confronted him with his stupidity, and to let him know that not only had he ruined her Christmas, but her little boy’s as well. My brother told her to go to the front and ask for the store manager, and say that he had told her she could have a raincheck. She demanded that he personally guaranty that the toy would be back in stock in time for Christmas. My brother, of course, could not guaranty such a thing, and told her so. As she stalked away to berate the store manager, she flung back, “I hope for your sake that this comes in by Christmas. How would you feel with a ruined Christmas on your conscience?”

As my brother regaled me with this tale, I, insensitive humbug that I am, began to laugh. Really? We’ve reached a point in society where saving $10 on a toy can make or break a Christmas? Really? This woman is teaching her child that his happiness should be wrapped up in a specific material possession? Really? Her only hope is this one store? She can’t just go to Amazon (where it took my husband about three seconds to find something similar) and get it for $20? Add in a $5 DVD, and you can even get free shipping! Look, you saved Christmas — all by yourself! You didn’t have to rely on anyone else to help you find your external, material happiness!

Anyway, this woman pretty much exemplifies exactly why I don’t head out on Black Friday. It turns people into screaming banshees of terror, abandoning all common sense and focusing on the materialism that they’ll decry come Sunday in a fit of piety while they admonish the folks in their Sunday school classes to “remember the reason for the season.” (Hint: The reason referred to is not an over-the-door basketball hoop.)

1 thought on “You Ruined My Christmas!”